Try a world-class and tested Data Destruction operation in Chicago. We are always concern of our clients’ satisfaction. This attribute molds our excellent service. This is the reason why we are the best in the field of e-waste recycling in Chicago.

We follow the standards of e-waste recycling in Chicago. Many of our valued clients have enjoyed the services we provide to them since then until now.

With our company, Chicago can now easily find the best that can provide computer recycling service. We are recognized in this industry for a long time because of the excellent results we deliver in every service we provide.

Proper Hard Drives Shredding cannot be done by anybody. Luckily, our company is tried and tested in this field. Our services are the best. We can confidently assure that to you.

We are a credible company that offers certified ITAD services in Chicago. Contact us today so we can discuss to you the different options we have in relation to IT asset disposition.

Data breaches are real. And a lot of breaches happened because of improper disposal of computers or electronic wastes. This happens in many ways—the transport of e-wastes from the company’s lair to the recycling facility is not secure; hard drives are not destroyed so data remains in the system; while the e-wastes were disposed of, the data in the system was not destroyed. All Green Electronics Recycling ensures that any of these situations is not going to happen with its Chicago Data Destruction service. 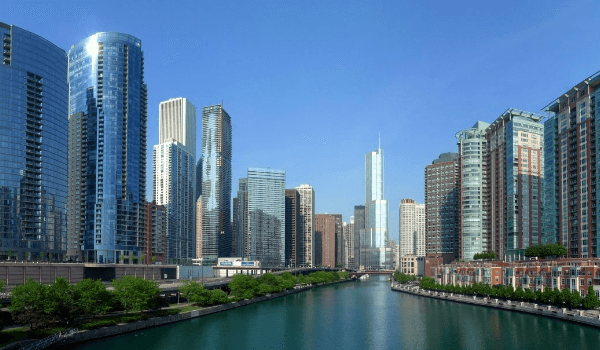 There is a state-of-the-art transportation that will ferry computers and e-wastes from a pickup point to the recycler’s facility. And if asked, it will do on-site hard drive shredding. This is to ensure that sensitive information will not survive or reach the recycling facility, hence giving companies peace of mind.

Chicago has over 2.7 million people, which makes this city the third most populous in the entire country. It also forms part of Chicagoland—the Chicago metropolitan area—which has a total population of around 10 million. It is home to O’Hare International Airport, which is the second busiest airport in the world.

The city is the country’s center for finance, commerce, industry, telecommunications, transportation and technology. With all these businesses, a reliable recycler that can handle data destruction is an important aspect in the city. Small businesses and large corporations prefer to keep business information to themselves.

We have an ISO 14001 Environmental Management Certification, which means it has followed every stringent standard imposed on computer recycling in order to protect the environment. The set of environmental management standards were first published in 1996. Since then, companies are trying their best to get an ISO certificate for their reputation’s sake.

Chicago Data Destruction service adheres to the ISO framework, which states the following: