Secure & Certified E-Waste Recycling in Charlotte, the rest of North Carolina and across the United States. With IT Asset Disposition, Certified Hard Drive Destruction and On-Site Hard Drive Shredding, we are Charlotte’s premier electronics recycling company.

Recycle computers in Charlotte with our convenient e-waste pickup and recycling services. Our convenient electronic recycling options will ensure proper handling of all of your e-waste.

Secure Shredding of Hard Drives in Charlotte and the surrounding area is safe and certified. We can send our special hard drive shredding system right to you and shred your hard drives while you watch.

Make your End-of-life IT Assets a source of revenue with certified ITAD services. When refreshing your IT Equipment, count on us to recycle, resell or destroy your old equipment according to your standards.

IT experts say that data destruction is equally as important as data storage.  But we do not always take this kind of a reminder seriously. We should never be complacent if we do not want to fall prey to data thieves who are just waiting for the right victim. Have you ever thought of passing on your old laptop, for example, to a younger sibling or giving this out as a donation? Before you even commit to making such a donation, make sure that you have managed to remove or destroy all of its data contents. Never take chances. Or better yet hire someone who knows how to do the job properly. With Charlotte Data Destruction, you are always in good hands. 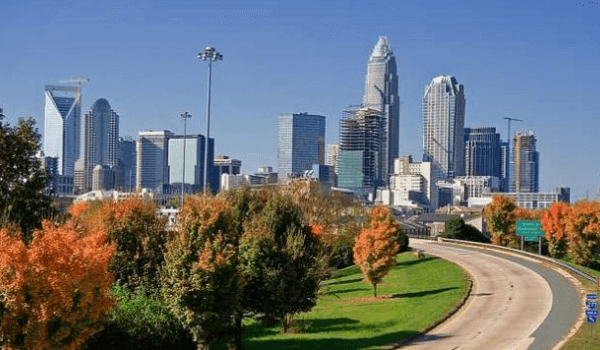 The largest city in North Carolina was named after Charlotte of Mecklenburg-Strelitz who became Queen of Great Britain seven years before the town was incorporated. At present, Charlotte is home to notable universities and colleges in this part of the country. The city’s largest and fastest growing university is the UNC Charlotte that now has more than 27, 000 students. In 2006, the city opened its first law school that received accreditation from the American Bar Association five years later.

The Charlotte School of Law now offers Juris Doctors degree and established affiliate programming with UNC Charlotte and the Johnson C. Smith University making it the largest law school in the Carolinas. The city also a large collection of 1.5 million books, CDs, and DVDs stored at the Charlotte Mecklenburg Library.  Residents of a city that values education and its collection of books and other reference materials also value their personal data.

We will take out precious data that you keep on your laptops to make sure that these are known only to you and by you. We understand how much you value secrecy and privacy and we are here to give you just that.

Trust only the services of All Green Electronics Recycling’s Charlotte Data Destruction for your data destruction needs. With us, you will never go wrong. We are a trusted service provider by the US Department of Homeland Security and the Federal Bureau of Investigation (FBI).

We do comprehensive and secure data destruction using a military-grade destruction system. We give you the option to chose between digital wiping and physical destruction. We are an industry leader in making sure that hard drive elimination is done permanently using our custom-built digital wiping system. Every storage device that you entrust to us and its data content will surely be made unrecoverable.