Businesses need to understand the benefits of using an on-site degaussing service. This ensures all confidential data left on media is completely deleted and unable to be restored. Leaving this information on hard drives is incredibly risky.

Eliminate the risk of someone accessing confidential information left on old hard drives by degaussing them before physically destroying them.

Physically destroying a tape will not make all the data left on it inaccessible since it will still have magnetic force, which is why degaussing is important.

Protect yourself against potential security breaches by physically destroying all old hard drives that will no longer be used.

Allows for you to watch your old hard drives get shredded as it happens, which adds an extra sense of security.

The process of destroying data stored on to magnetic media such as hard drives and backup tapes is called degaussing. It is done by using massive pulses of magnetic energy, which destroys data instantly. Degaussing is an excellent way for businesses to protect their confidential information on devices that are no longer used. Simply have media degaussed before discarding it. On-site degaussing is the only guaranteed way to be sure that all digital data is destroyed since even some methods of physical destruction aren’t always foolproof. 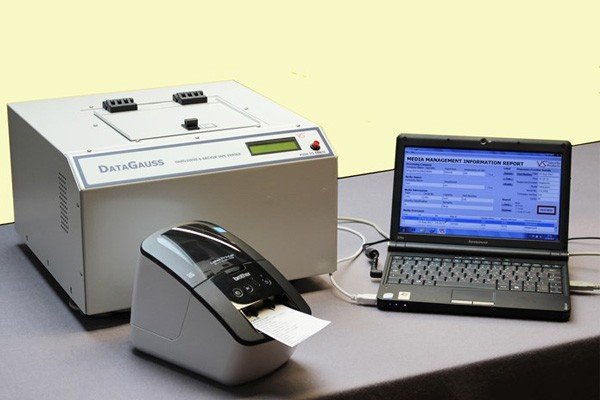 Degaussing is done by using a powerful magnetic field to change the magnetic alignment which will then leave the magnetic media in random patterns. This process makes any data completely unrecoverable, in turn rendering the media useless.

The degaussing process begins with an engineer delivering the degaussing equipment to the site. An electromagnetic pulse of 9,000 oersteds will be applied, which erases all data from a device. Every device is exposed to 2 Tesla of erasing force for at least 45 seconds. After the job is completed, businesses can have the storage devices transported back to the facility for other media shredding.

The highest level of data destruction and sanitizing achievable for hard drives is degaussing. This is the only way to ensure that all data is completely removed from a hard drive. Deleting data from a hard drive is not secure enough because – with the right software and know-how – anything can be recovered.

What Can Happen If a Hard Drive Isn’t Degaussed?

In 2014, NAID released the findings of a study that analyzed information left on recycled computers. According to the study, 30 percent of recycled hard drives contained highly confidential information. Some of this information included client and account holder information, such as medical records and banking information. In the wrong hands, this could be extremely detrimental.

To find out more about on-site degaussing and how it can benefit your company or organization, contact All Green Recycling today.