How to Degauss a Hard Drive 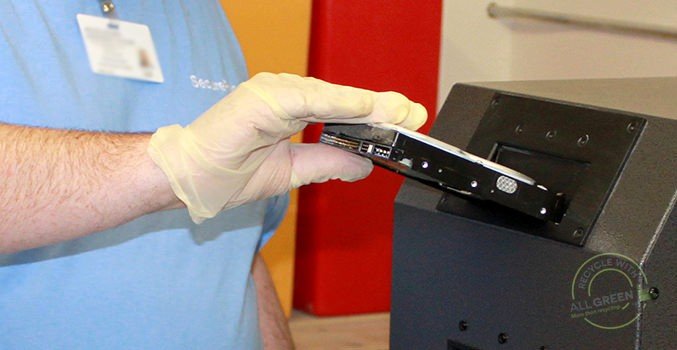 Do you know how to degauss a hard drive? Degaussing a hard-drive is a little bit more complicated than just erasing all of the data like when you format a hard drive. The process of degaussing includes decreasing and/or eliminating the remnant magnetic field to ensure secure data destruction before recycling as part of an approved e-waste recycling…

Do you know how to degauss a hard drive? Degaussing a hard-drive is a little bit more complicated than just erasing all of the data like when you format a hard drive. The process of degaussing includes decreasing and/or eliminating the remnant magnetic field to ensure secure data destruction before recycling as part of an approved e-waste recycling program.

How to Degauss a Hard Drive: What is Degaussing?

In order to learn how to degauss a hard drive, you first need to know what degaussing means. The term “degaussing” got its name from the gauss, which is a unit of magnetism. The unit of magnetism, in turn, got its name from Carl Friedrich Gauss. Because of magnetic hysteresis, the possibility of reducing a magnetic field entirely to zero is not commonly possible. Therefore, the process of degaussing usually induces a considerably small “known” field that’s called bias.

The process of degaussing was originally used to reduce the magnetic signatures of ships during World War II. This process is also used in the reduction of magnetic fields in electronic items like CRT monitors, and it is also used to destroy the data on magnetic data storage devices, like the hard drive of a computer, before recycling these electronics.

How to Degauss a Hard Drive Using a Degausser

A degausser is basically a machine that generates an intense magnetic field. Whenever it’s exposed to any fluctuating magnetic field generated by a degausser machine, an object’s magnetic charge is automatically reset to a state of magnetic neutrality. The object becomes magnetically neutral.

When applied to any magnetic media, like the hard drive from a computer, the movement of the magnetic media through the degaussing field automatically realigns the particles, which resets the media’s magnetic field to a state of almost zero. It also effectively erases all the data that had been previously saved on the hard drive. It’s a method of data destruciton that can be even more effective than hard drive shredding.

In the majority of instances, the degaussing process resets all of the media to a pretty much like-new state, which makes it capable of being reused and/or recycled. In some of these instances, this process simply wipes away the media to prepare it for safe, secure disposal. There are retailers that offer different kinds of degausser machines and other degaussing equipment for different types of applications.

There Are Different Types of Degaussers

Within recent years, new laws outline stricter guidelines as well as greater penalties concerning data security, which makes it illegal for businesses to irresponsibly or carelessly discard any personal or critical data. It’s now illegal for companies to just throw out hard drives or computer tape, and not only due to losing critical data, but also because of the amount environmental pollution.

Are you an IT asset manager looking to maximize ROI on retired office equipment such as cell phones, printers, and computers? Consider an IT asset disposition program for your business. Contact us to find out more…

How Businesses Dispose of Electronic Waste

What Is Data Destruction, The Best Ways To Erase Your Data Securely

5 Benefits of Going Green for Any Business